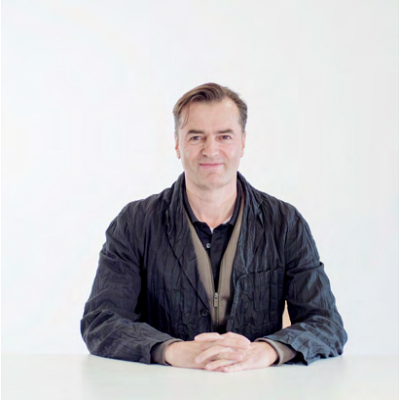 Patrik Schumacher (b. 1961) is a partner at Zaha Hadid Architects and founding director at the AA Design Research Lab. He joined Zaha Hadid in 1988 and has since been the co-author of many key projects, a.o. MAXXI – the National Italian Museum for Art and Architecture of the 21st century in Rome, Seoul's Dong Daemon Design Centre, and the bid-winning design for Tokyo's Olympic stadium for 2020. In 2010, he won the Royal Institute of British Architects' Stirling Prize for excellence in architecture.

Patrik Schumacher studied philosophy, mathematics, and architecture in Bonn, London, and Stuttgart, where he received his Diploma in Architecture in 1990. In 1999, he completed his PhD at the Institute for Cultural Science, Klagenfurt University. In 1996, he founded the "Design Research Laboratory" with Brett Steele at the Architectural Association in London and continues to teach in the program. Since 2000, Patrik Schumacher is also guest professor at the University of Applied Arts in Vienna. In 2013, he was appointed as the first John Portman Chair in Architecture at Harvard University's Graduate School of Design. In 2010 and 2012, he published the two volumes of his theoretical opus magnum The Autopoiesis of Architecture. In 2002, Patrik Schumacher curated Latent Utopias - Experiments within Contemporary Architecture, and he is currently planning the exhibition Parametricism – The New International Style.